The Hoops Family was honored for their donation, which impacts the lives of many Tri-State families

Our children's hospital is named after the Hoops family of Milton, WV, who live their faith by sharing their blessings with those in need. To learn more about this unique family and the lives they have changed —and saved —with their generosity, please read this profile written by Katherine Reasons-Pyles, originally published in December, 2012.

The Faith to See it Through

When it comes to making decisions, Jeff Hoops relies on two things: his unwavering faith in God and his unconditional love for family. And once he knows the decision he’s making is the right one, he sees it through with unparalleled passion and dedication.

From constructing new dorms at Appalachian Bible College in Beckley to acquiring a hotel in the Dominican Republic that provides short-term mission teams with a safe place to stay, from supporting new facilities at the University of Pikeville, Marshall University and WVU to building an orphanage in India that houses and educates more than 2,000 orphaned children, from helping small villages in Africa become self-sufficient by drilling water wells and providing livestock to giving unprecedented financial support for the children’s hospital at Cabell Huntington Hospital, Jeff Hoops’ decisions have been changing lives both locally and internationally for decades. 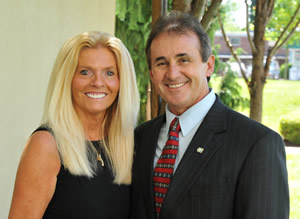 A $3 million donation from Jeff and Patricia Hoops and their family brought renewed momentum to the fundraising campaign, allowing construction to begin. Photo/Rick Lee

However, the enormous generosity of the Hoops family has been kept private until recently. Jeff and his wife Patricia saw the birth of three grandchildren at Cabell Huntington Hospital, and an originally anonymous contribution from the family to Cabell Huntington’s Children’s Hospital Campaign grew into a larger, more public donation of $3 million once they experienced firsthand how important it is for the Tri-State to have a children’s hospital.

“Trish and I are blessed with three wonderful sons, Jeffery, Jeremy and Josh,” said Jeff Hoops. “All three are married, and we now have three great daughters as well —their wives Jessica, Lesley and Amanda. Amanda brought two children into our family, Jered and Lola, who have been a great addition. Josh and Amanda enriched our lives two years ago with our first granddaughter Lilly, who has her ‘Papa’ wrapped around her little finger."

Then, a true answer to prayer occurred seven months ago when, after a long struggle, Jeffery and Jessica gave birth to twins, a girl and boy, Journey and Jameson,” said Hoops. "The birth of our 'two little miracles' was a life-changing experience for the entire family. 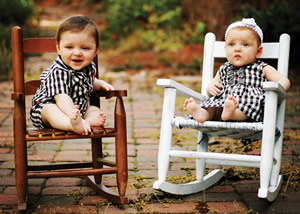 “We got to experience firsthand not only the expertise, but also the love and genuine concern that Cabell Huntington’s nurses and doctors have for the patients they tirelessly serve,” he continued. “We visited the NICU a year before the twins were born, and we were touched just from that visit —but then to experience the love and care firsthand as the twins spent time there, made us even more appreciative of the job the caregivers do there each and every day.”

Hoops said the reason his family decided to make their donation public was to leave their grandchildren and great-grandchildren with a heritage of giving back to the community.

“Jesus said we would know His people by their works,” he said, “and I want our grandchildren to know that their grandparents and parents believed in giving back. We hope they, too, will live a life of service to others.”

Now, four years after the Hoops family first became involved with the project, ground has officially been broken on the Hoops Family Children’s Hospital, a name chosen by Jeff and Patricia to include their current family as well as future grandchildren, great-grandchildren and beyond. David Graley, vice president and COO of the Cabell Huntington Hospital Foundation and a long-time friend of the Hoops family, said their decision to be the lead donor for the project represents the extraordinary dedication they have to area children and families.

“Jeff and Trish and their family are wonderful people, and they love this community. As soon as they learned about the Children’s Hospital Project, they took it to heart,” said Graley. “That’s just how that family operates —through their hearts. When they first got involved, they didn’t have any grandchildren. But when they did have grandchildren, the experiences during those times were just confirmation for them that this was the right thing to do.”

Hoops said his first visit to Cabell Huntington Hospital was during a tour just a few short years ago, when Graley first introduced the Children’s Hospital Project to him.

“Ever since that time,” he said, “my entire family has been touched by the hospital and the staff in so many ways. I have no doubt that when we as a family look back on this contribution, we will view it as one of our wisest decisions that has impacted more lives in a positive way than any other investment we could have made. My prayer every morning is for wisdom and for God to allow me to make a positive difference in the world. Until we made this decision, I could not quit thinking about it —and once the decision was made, I was at peace.”

Graley said that in addition to the obvious financial impact of the multimillion-dollar contribution, the Hoops family’s donation had an intangible benefit as well; it brought renewed momentum and hope to the entire Children’s Hospital Campaign.

The Hoops family is sharing a heritage of giving back to the community with their descendants, like granddaughter Lilly, shown here at age two. Photo/Hoops Family

“Their donation reaffirmed everything we’ve been trying to do,” Graley said. “When we started this campaign, we knew it would require faith and heart to reach our goal. No one had ever raised this kind of money before. Of course we at Cabell Huntington have our hearts in this, but the Hoops family’s contribution has shown the great extent to which others in our community have their hearts in it as well.”

“I believe deep inside we all know we have a responsibility to help others,” said Hoops, “and what better way to do that than to do something that can help a child? Having this facility will give so many children a chance at good health. I think of the families who have to travel to Cincinnati or Pittsburgh now but will be able to stay closer to home soon, and I think of the doctors and specialists who will be brought to the area, improving care for everyone in our region.”

Hoops is the founder and president of Revelation Energy LLC, a Milton-based mining company where his sons Jeffery and Jeremy work as engineers. All three sons attended or are attending Marshall University; Josh, the youngest, is a current student. Jeff and Patricia are huge fans of both the Herd and the Mountaineers, attending as many games as they can each year. Needless to say, the Hoops legacy is here to stay, far beyond the naming of the children’s hospital.

“We see this initial fundraising campaign as the start of something wonderful for this area, and we are looking forward to getting more involved, getting to know the staff and personnel and learning more ways to help them and the people they will be serving,” Hoops said. “My grandmother used to say, ‘You can’t out-give God.’ God has entrusted us with so much, and we have a responsibility to be good stewards of all he has given us.”